Growing Up in Hungary seeks to depict a few features of the everyday life of cohort babies and their mothers. Our questions, in the second wave of the research, asked about the most basic points in the life of families caring for six-months-old babies: their care, calming, and sleeping habits.

This primarily study was conducted on data from 1544 people. 6 of 10 six-months-old babies use pacifiers, the frequency is the same among boys and girls. The majority of mothers, 87% said that they bathed their child every day, 2% several times a day, and 11% every other day only. Less frequent bathing was under 1%. 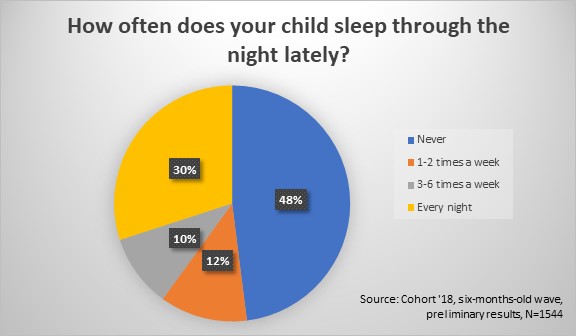 Six-months-old babies sleep for an average of 3.5 hours during the day, and 9 hours at night. The average sleep of mothers is 7 hours at night, awakening at about 3 times during this period. The greater part (57%) of the children never sleep in the bed of the parents, but every fourth child spends at least part of the night in the bed of the parents.

Only 5% of the six-months-old children experienced being away from their mothers for at least two days, and spending the night elsewhere too. The reasons greatly varied, most cases involved hospitalization, but there were work-related or leisure trips as well.