Living together with the grandparents in a household?

The question we focus on in this brief analysis is to look at which households are more likely to cohabitate with grandparents? Previous research indicates that this is more common among single-parent families, then among those where there are two parents. We could also read (in recently conducted studies) that we find a much higher proportion of grandmothers than that of grandfathers among families cohabiting with grandparents (Monostori-Murinkó 2018). Possible explanations to this could be that a widowed grandmother, who is left alone is more likely to move in with her child’s family after the death of her partner; or it may also be the case that the cohort baby’s grandmother offers to accommodate her child’s family in her household if the young family is unable to establish its own, at least until her child’s family acquire the resources needed to move to a separate apartment. Alternatively, it is also possible that after a divorce, the younger generation may move “home” to a grandmother living alone rather than form an independent household.

The results calculated from the data collected through the Cohort ’18 study is in line with the trends uncovered by previous research. The vast majority of pregnant women, 85.9 per cent to be precise, indicated that they were not living together in one household with grandparents. Nearly five per cent (4.7%) said they were living together with only a grandmother, and 1 per cent living with only a grandfather. A relatively high proportion of expecting mothers taking part in the study, 8 per cent, indicated that they live together in one household with both a grandmother and a grandfather. This may be related to the fact that, as already indicated, the majority of pregnant women are expecting their first child, i.e. they are most likely young and are at the beginning of their family career, so it is likely that some people have not yet been able to move to a separate household.

Whether or not a grandparent lives with the expecting mother differs greatly based on the pregnant woman’s situation, depending on the type of household she lives in (Figure 1). It is among single expecting mothers that grandmothers and grandfathers are most likely to live in the same household with, especially if a minor child does not already live with the pregnant woman (36.6%). Surprisingly, three-quarters of single pregnant women with three or more children living in their household did not indicate that they were living together with a grandparent (75%). However, it is among them that the proportion of those who live in one household with (only) a grandfather is the highest (4.2%). The vast majority of pregnant women living together with a partner, 85 to 90 percent of them, do not live with a grandparent; this is especially true if one (89.9%) or two (89.7%) children already live in the cohabiting expecting household. If the couple is expecting their first child, it is more likely that they live together with grandparents: 9 percent of pregnant women with a partner live in the same household with both a grandmother and a grandfather, while 4.2 percent live only with a grandmother. Thus, the proportion of multigenerational households is indeed higher among single expecting mothers than it is among pregnant women with a partner, especially among single mothers who are expecting their first child. Furthermore, it can also be stated that if a grandparent lives with them in the same household, more often than not, it is the grandmother rather than the grandfather. We also want to emphasize that the proportion of pregnant women who live with both a grandmother and a grandfather is also relatively high, and that this is more typical among those expecting a child on their own (without a partner). (Of the total population, i.e. not only pregnant women, grandmothers and grandfathers live together with grandchildren in 2% of households in cases of children aged 24 and under [Monostori-Murinkó 2018]). 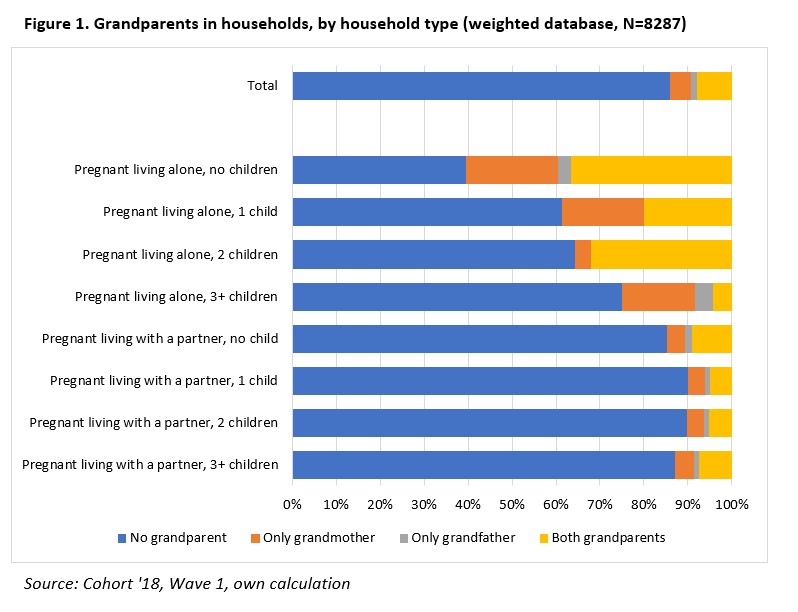 Previous studies based on the parents' educational attainment found that it was the tertiary educated parents among whom we could find the lowest rates of living together with grandparents, while we find the highest rates among those with primary educational attainment (Monostori-Murinkó 2018). Indeed, we also found the same among pregnant women in the Cohort ’18 study: while 95.0 percent of those with a university/college diploma; 69.3 percent of those with completed primary school (or lower) attainment, said they did not live in one household with a grandparent (Table 1). Consistent with these findings, only 1.8 percent of university/college graduates live with only a grandmother, 0.7 percent with only a grandfather, and 2.5 percent live with both grandparents; and among those with up to 8 completed years of primary education, these proportions are consistently higher: 8.8%; 2.4% and 19.5%.