The Cohort ’18 study does not only examine the development of children but also provides insight into the lives of families raising these young children; since the birth of a child brings many unseen changes.

Now, we compare the period of pregnancy and when the child is six-months-old in terms of how much housework-load the mother takes on and in terms of the differences in parental roles, based on data from the Cohorts ’18 study.[1] Mothers were asked during pregnancy, and then when their child was six-months-old, about how much of the household chores (cooking, washing dishes, cleaning, shopping, minor repairs, planning leisure and financial management) fell on them as a responsibility and based on this, we examined whether these had increased after the birth of their child.

The division of housework within families is the subject of many studies in Hungary. It is clear from these that although the participation of women in the labour market is very significant (many have full-time employment), women traditionally bear the brunt of the division of household tasks. The presence of this phenomenon also called women’s “second shift,” varies depending on whether the couple is raising a child, on the number and age of these children, but is also influenced by where the family resides, on the couples ’educational attainment and age, and even on the age differences of partners.

It becomes clear from previous studies that having a child is a decisive factor in determining the division of domestic work within the family. There is a growth in the proportion of housework for women after birth, especially in families with young children (in addition to childcare responsibilities), even if, in most cases, they were initially unequally distributed between the couple.

Data from the Cohort ’18 study (based on maternal reports) show that there is a definite shift in the distribution of household related tasks towards the women already during pregnancy, where they are responsible for chores such as cooking, washing dishes, shopping or cleaning. Men mostly take on the responsibilities of doing repairs in the apartment, house, or around the house, as their share of housework. The most common joint or shared responsibilities are shopping, family finance, and planning leisure activities.

According to the data from the second wave, after the birth of the child, when they are around the age of six months, the mothers tend to do the washing-up and clean a little more, and the shared responsibilities decrease in almost every field. However, the managing of shopping is no longer a joint activity either (or less so); there the role of fathers increases. 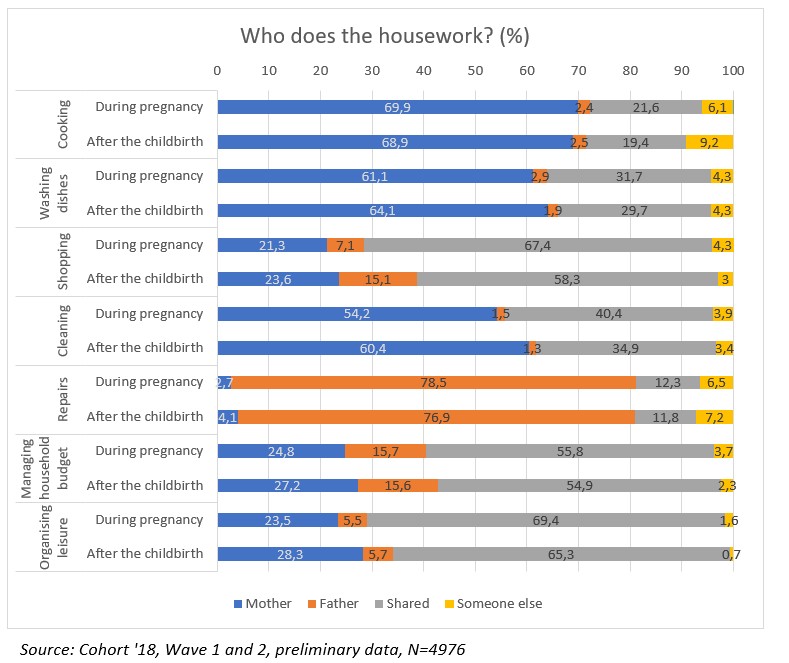 Each family participating in the study has a six-months-old child, but in many cases, these were already families with small children even before the birth of the cohort baby, and the half-year child is the second or third sibling in the family. It is, therefore, worth examining the differences in the division of labour in families where the six-months-old baby is the first-born child and where the cohort baby has elder siblings. Here, too, results show that although mothers definitely tend to take on more housework then the fathers, such as cooking, washing dishes, cleaning, the disparity is even larger if the cohort baby was not the first-born child of the family. The unequal distribution of household responsibilities, therefore, affects mothers with more than one child most adversely. This is not about the fact that, in the case of more children, fathers tend to take on fewer tasks, instead that there is a great reduction in joint or shared household responsibilities and activities. We can also clearly see from the data how external help (whether paid or favour-based) tends to come to mothers with their first child, but with the second and third children born, the mothers’ household responsibilities tend to increase. 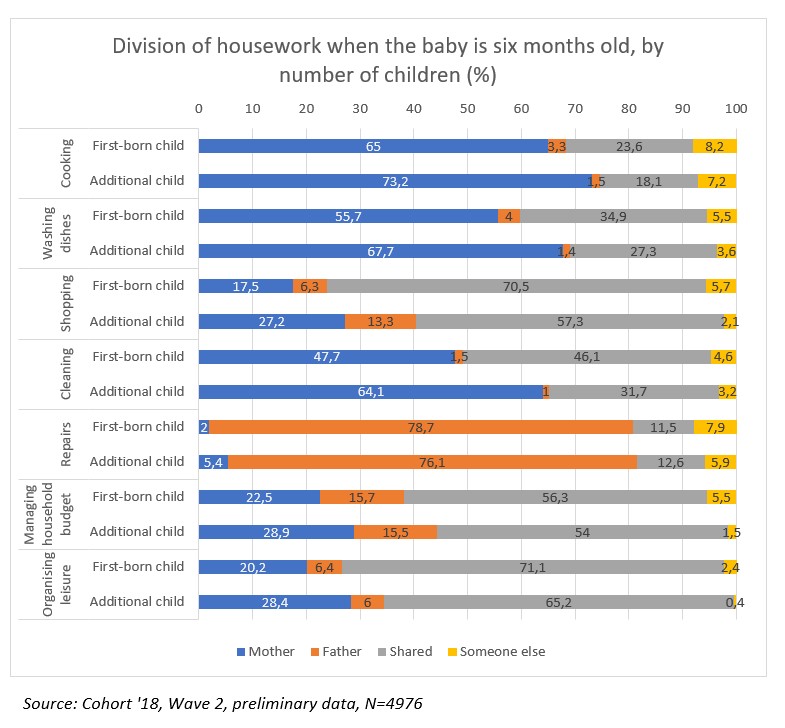 But to what extent do mothers’ household responsibilities multiply after having children? And who are the ones who are most affected by the birth of a child in this regard? We can examine this question by analysing each respondent individually in terms of how the division of labour within the family develops during pregnancy, and then when the child is six months old. If we look at how many tasks each of our respondents had before and after giving birth, from the seven domestic jobs listed, differences can be examined and identified as an increase or decrease in the household burden after childbirth. In total, pregnant women receive an average of 2.4 household chores that they do mostly or exclusively. For those raising a six-month-old child, the average is higher, 2.75 exclusive tasks. For one-third of mothers, there is no increase in tasks between pregnancy and when the child is six months old. However, in the case of more than 40 percent of them, the number of household tasks they performed increased in the reviewed period, mostly by being responsible for one or two additional household tasks. A total of 26 percent of mothers do less housework (tasks performed) at the six-month-old wave then during pregnancy. 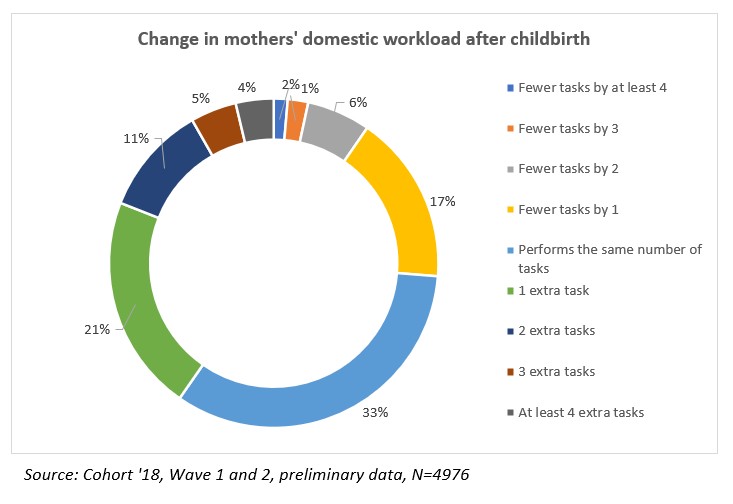 Therefore, the overall number of household chores increases on average after childbirth, but this increase may vary from individual to individual and depends on many things. For example, it is easy to imagine that mothers who previously were employed during pregnancy become responsible for more tasks when they are at home with their six-month-old child. But we can also make the assumption that it is the birth of the first child that actually significantly modifies the division of labour within the household. It is also useful to examine these aspects because it can uncover which group of women are affected by childbearing the most by means of a large (relative) increase in domestic workload. This can be based on the average difference in the number of household tasks respondents perform during and after pregnancy.

If we group the responding mothers on the basis of work during pregnancy and the number of children (is the six-months-old a first-born child?) and examine the average increase in the number of (household) tasks within these groups, it becomes clear that although, as we have seen above, mothers already raising children (cohort baby was not the first child) do the most housework, the increase in tasks is the smallest among them after the birth of their child. The number of household tasks increases most for women who were employed during their pregnancy and then stayed home with their first-born child. Thus, in families having children, the birth of the first child after a period of employment (while the mother is expecting) seems to transform the power relations in terms of the division of housework between men and women the most, shifting responsibilities towards the woman. Previous studies also suggest that the huge shift in the division of housework (in favour of men) occurs with the birth of the first child and is particularly a characteristic of the phase of having small children. Women’s domestic workload show and increase in all groups in the postpartum semester.

[1] The calculations were done on the database of individually linked questionnaires (pregnant women survey and six-months-old survey) of the Cohorts ’18 study. The preliminary and partial, unweighted databases contain the data of the first N = 4976 pregnant respondents who also answered the six-months-old questionnaire, and for whom their partner remained unchanged in the period between the two surveys.