In the third wave of the Cohort ’18 study, conducted at the 18-months-old age of the cohort babies, we, in addition to mothers, also asked fathers about parenting in a survey administered through telephone. In the following paragraphs, one can find the preliminary results of an analysis of the amount and content of time spent raising children, based on data from the first 1,073 respondents.

For the “new father” figure that is increasingly prevalent today, paternity encompasses the ongoing care for children and presence in their early lives more and more, in addition to their breadwinning role within the family. However, fathers still spend significantly less time with their children than mothers do, as most men still tend to be the primary breadwinners of the family. Workplace and family needs often lead to conflicts in roles for fathers.

In the third phase of the Cohort ’18 study, we asked fathers how they generally see the amount of time they spend with their 18-months-old child. Based on their responses, for 70% of them, the time spent with the child is mostly less than what they would like. 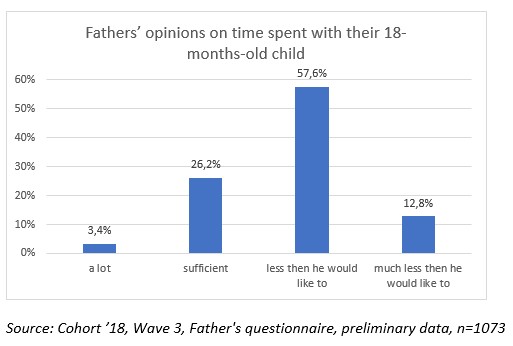 Researchers are divided on whether or not child-bearing, and childcare tasks can be considered to be part of domestic work, however, other studies also show that men are more willing to engage in activities related to children than to do chores around the house (Murinkó, 2014). Within child-related tasks, they are mostly involved in leisure activities.

In the Cohort ’18 study, in addition to evaluating the amount of time spent with a child, we also inquired about the number of days, in the week prior to the survey, various parenting activities were performed by the fathers with their young child included in the study. At least 72% of fathers carry out activities related to the upbringing, entertainment and teaching of their children once a week (at least one day within the week preceding the interview).

Fathers, to the highest degree, reported on spending time on in-house play, the child’s teaching, joint musical or dancing activities and reading to/with their 18-months-old baby. Almost everyone (min. 91%) performed these activities with their child at least once in the week predating the interview.

The least popular joint activities among fathers proved to be rhyming, storytelling and handcrafting, which 76 and 72 percent of the responding fathers did with their children in the week before, respectively. 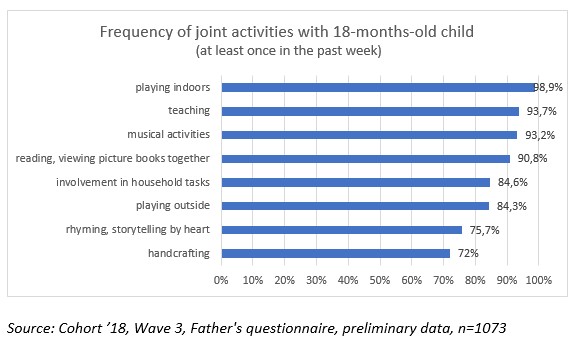 Childcare responsibilities are primarily performed by women or shared between parents. The exclusive responsibility of men in given childcare tasks is rare within families. If the father is involved in the care, the mother is still usually present (Murinkó, 2014).

The research examined how certain childcare and parenting responsibilities are distributed between mothers and fathers on weekdays and weekends, assuming different levels of the fathers’ involvement on weekdays as opposed to weekends due to their employment. The fathers had to state whether they, the mother, or the two of them together (or shared) did given activities (or perhaps someone other than the parents, such as the grandmother). Below, we show the proportion of activities related to the upbringing and care of the child that is performed (more) by the fathers or by the fathers shared / with the mothers.

Overall, the activities performed by fathers on their own on weekdays were very low: on average, less than 10% of them would be responsible for caring for the children in some way alone. However, bathing stands out from the activities, which 29% of fathers do alone. Activities done together with mothers were much more common: on average, slightly more than half (56%) of fathers participated in the noted activities with their partners. Those who reported having played with children were the largest group within the sample: 87% of fathers regularly do this activity together with mothers. 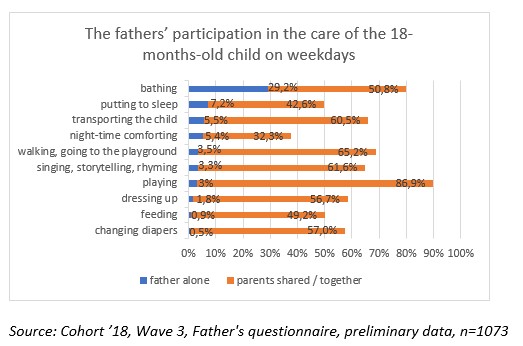 There is more time on weekends for various activities

Compared to weekdays, fathers are more likely to be involved in all childcare activities on weekends, thus, working has a negative impact on time spent with a young child, even concerning activities that are likely to be mostly outside of working hours. However, the frequency of activities performed by fathers alone is below 10% on weekends as well (excluding bathing).

Nevertheless, nearly three-quarters of fathers (71 percent) are present on weekends (together with mothers) at most of the activities studied in the research, compared to 56 percent on weekdays. Almost all of the fathers interviewed participate in activities related to their weekend leisure, i.e. playing together (92%), walking, going to the playground (90%) and transporting the child (88%). In addition, dressing up and feeding the child (with the mother) occur at a significantly higher rate on weekends, 73-77 percent, compared to everyday life. 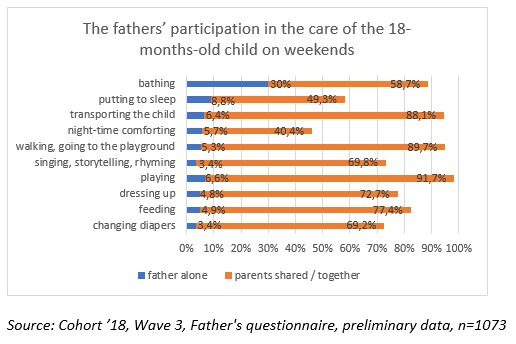