In the third wave of the Cohort ’18 study, at the 18-months old age of the cohort child, fathers were also asked about their challenges and joys with regards to parenting as part of a telephone survey. The preliminary descriptive results presented here are based on data from 2025 respondents.

We can assume that parenting comes with serious compromises and sacrifices. The right question is not whether parents have less free time after the arrival of their child; rather, how fathers’ responsibilities at work and at home interact? Figure 1 shows the proportion of fathers, in the past three months, who no longer had the energy left to do their share of the domestic work when returning home from work. Slightly more than a third (35%) of fathers replied to our question that they had never been too tired to help in the household after work in the past three months, 24.6% infrequently, 27% several times a month, and 13% was too tired to help even several times a week. In a similar distribution, we can see how difficult it has been for fathers to meet their family responsibilities over the past three months because of their workload at their day job.

Thus, it is already clear that work consumes some of the energies that could be spent on things to do around the house, but is there also a backward effect? Has the work performance of fathers deteriorated when looking from the 18-months old period? The answer to this question can also be found in Figure 1. According to our data, almost 70% of fathers did not experience a deterioration in their work due to the workload at home, 18.4% seldom, 10.7% a few times a month, and only 2% a few times a week. It was relatively more common for them to have difficulty concentrating on their work responsibilities because of various family responsibilities. 24.4% of respondents experienced such difficulties infrequently, 14.2% several times a month, 3.6% several times a week, and 57.7% did not experience such a problem. 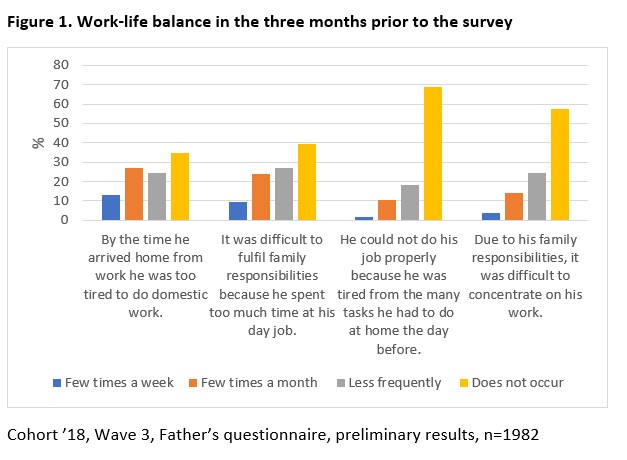 Overall, we can see from the data that maintaining a work-life balance is a challenge for responding fathers, and that the balance is more often upset at the expense of their private life rather than their work.

Thus, fathers are usually able to do their job properly even besides their family responsibilities. However, the question may arise as to whether the birth of their child had an impact on their job prospects or financial situation.

A newcomer entails significant financial cost for a family, and shared attention can also hinder progress in the workplace hierarchy. But what do the fathers think about this?

Interestingly, 21% of respondents rate their financial situation to be better or much better than before having a baby, 69% say nothing has changed, and only 9% have gotten worse or much worse off.

In terms of fathers’ job prospects, we can also report positive trends: 80% did not notice a change, 17% feel better about their opportunities while less than 3% feel worse.

In the media, it is more common for one to read about topics related mothers’ job opportunities. Undoubtedly, their reintegration is difficult, and employers are also less open to take on women employees who have families. Accordingly, 9.5% of fathers believe that their partner has better job opportunities than before giving birth, 68.5% see no difference, and more than 22% say their partners’ opportunities became more restricted.

Overall, according to the responses to the above-presented work-life balance questions, the work prospects and financial situation of the majority of fathers were not significantly, or if at all, were positively affected by the birth of their child.

In the future, it would be worth examining the extent to which the present results are influenced by the number of children the father had before and since the birth of their cohort child.

----
Our preliminary analysis is based on a raw, 2025-person database, studying the fathers of cohort children, conducted via telephone at the 18-months old age of their child. The purpose of presenting the preliminary results is to give visibility to the opinions of fathers with small children in addition to exploring and publishing maternal responses. At the same time, the paternal study cannot be considered representative (unlike the surveys with mothers), thus, the above does not necessarily reflects the general opinion and attitudes of Hungarian fathers.