In our previous article, we examined the prospective impact of the unborn child on fathers’ work and family responsibilities. In this report, we seek to answer the question of how fathers perceive stereotypes about themselves. Is the man the one who has to make decisions in the family? Is career more important than family for a man? Do fathers find it difficult to express their feelings toward their children? Based on a preliminary analysis of our 2025-person sample, we received the following responses.

What is the role of the father?

Is he the main decision maker? Are families with young children characterized by a patriarchal arrangement, or are parents making decisions together? The latter seems to prevail, as only 12% of the responding fathers believe firmly that the task of decision-making in the family belongs to the man (Figure 1). 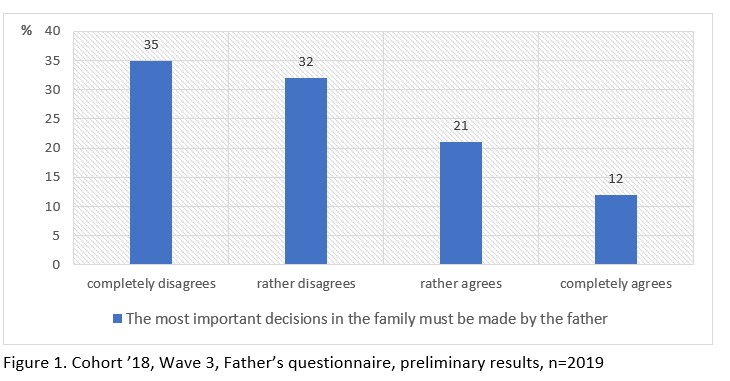 Another often-voiced stereotype is that career and money are of primary importance to men, which is not supported by our past or current analysis. As part of our research, we also assessed whether fathers agree with the statement that making a lot of money is the most important goal in a man’s life. Almost half of the fathers (49%) completely disagreed, 34% rather disagreed, 11% rather agreed, and only 5% completely agreed.

Am I a good enough parent?

63% of our respondents believed that fathers could care for a small child as well as mothers can, and only 7% said they thought a father could not function as well at all in this regard (Figure 2). 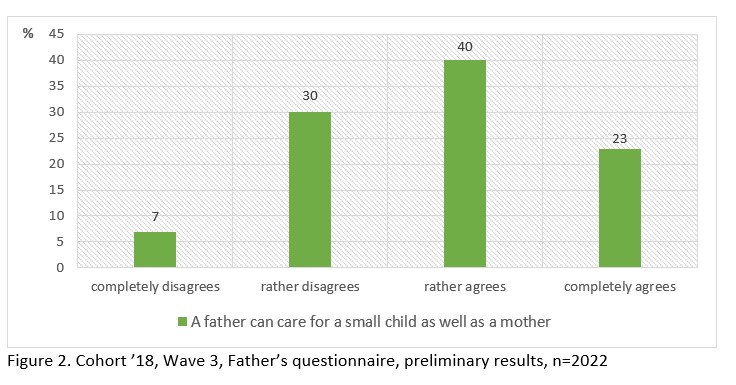 So, one-fifth of fathers think that it may be difficult for a man to show affection toward a baby, but what about older children? We asked our respondents what they think about whether parenting was more enjoyable when children are older. Here, the number of respondents decreased significantly because the number of fathers who could not answer the question increased to 5%. The answers are almost completely uniformly distributed, with half of the fathers agreeing, while the other half disagreeing with this idea. 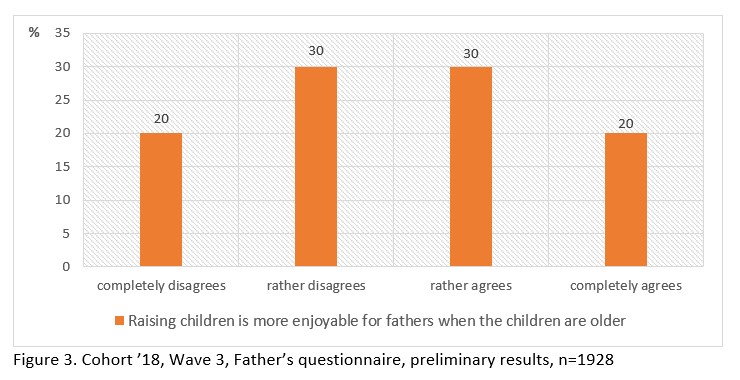 Finally, we also asked respondents what kind of parents they consider themselves to be. Of the 2025 respondents, only 0,2% consider themselves a worse-than-average parent. 31% are average, 51% are better-than-average, and 17% are very good parents according to their opinion. The majority of fathers, thus, seem to be confident in this role by the 18-months age of their child.

----
Our preliminary analysis is based on a raw, 2025-person database, studying the fathers of cohort children, conducted via telephone at the 18-months old age of their child. The purpose of presenting the preliminary results is to give visibility to the opinions of fathers with small children in addition to exploring and publishing maternal responses. At the same time, the paternal study cannot be considered representative (unlike the surveys with mothers), thus, the above does not necessarily reflects the general opinion and attitudes of Hungarian fathers.