Continuing our series on fathers, we now look at the mental health of fathers raising an 18-months-old child. In our previous articles, based on preliminary data analyses of replies of 2025 respondents, we presented the changes in terms of the fathers’ work life after the birth of their child; and we presented the fathers’ opinions on the stereotypes surrounding fatherhood.

Depression and anxiety are the most common mental illnesses. Symptoms of depression include sadness, decreased interest and inability to feel happy, changes in weight or appetite, sleep disturbances (decreased or increased sleep), restlessness or restraint, fatigue and weakness, decreased thinking/concentration/decision-making ability, low self-esteem, guilt and drowsiness, as well as frequent thoughts of death/suicide. To diagnose someone with depression disorder, at least five of these symptoms must persist for at least two weeks (APA, 2013).

Anxiety is a term that is used quite often in everyday life. It is used, e.g., to describe pre-exam agitation or excitement of preparing for a date, however, the category of anxiety disorders includes more severe problems, such as panic disorder or various phobias (e.g., fear of spiders or fear of means of transport). In anxiety disorder, the leading symptom is excessive fear, anxiety, and worry.

In the Cohort ’18 study, we asked fathers of young children how often they experienced depressive and anxiety symptoms in the two weeks prior to the interview. To assess this, we asked four questions that are used in clinical practice to rapidly screen for depression and anxiety (PHQ-4; Kroenke et al., 2009). Based on international results, the measurement identifies an anxiety or depressive problem if one of the two symptoms is experienced by the respondent almost daily, or if both symptoms are experienced with a certain frequency. Based on this criterion, 8.1 percent of fathers are presumed to have an anxiety problem and 3.7 percent have a depressive disorder (Figure 1). 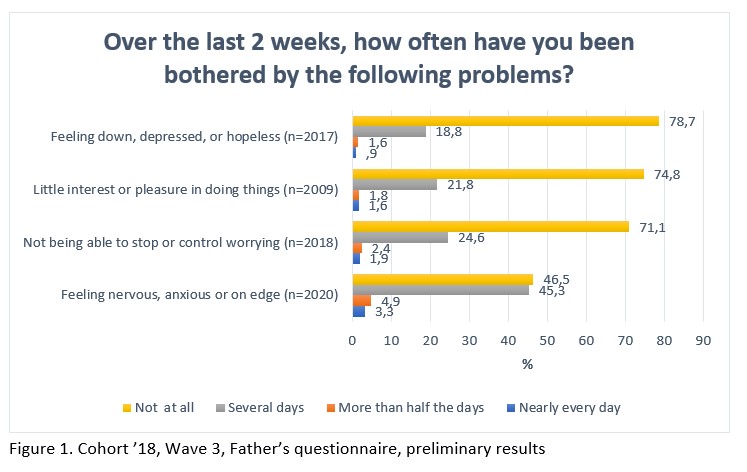 We also asked fathers how they see their lives overall, how satisfied they are with it. As shown in Figure 2, more than three-quarters of respondents rated at least 8 on a scale of 0 to 10, and only 5% of fathers reported moderate or lower levels of satisfaction. 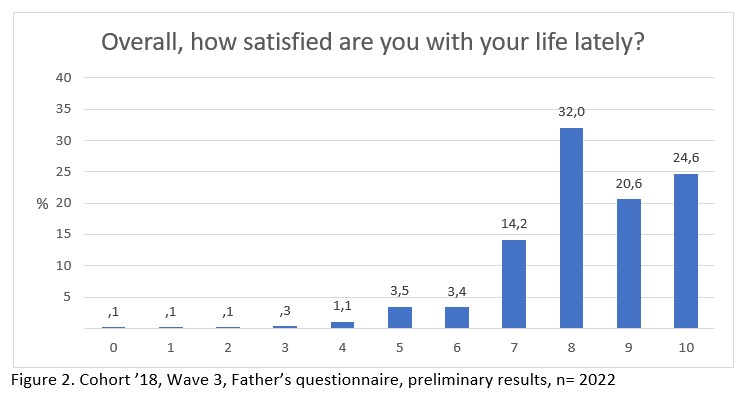 From the point of view of mental health, the extent to which a person can count on the practical and emotional help and support of others is key. Fathers in the Cohort ’18 study was asked about the number of close friends they had, on whom they could count on in this regard. Based on our results, fathers raising an 18-months-old child have an average of 6-7 friends, the most common value being 5. However, 3% of fathers have no close friends at all, while 23% reported to have 10 or more close friends. 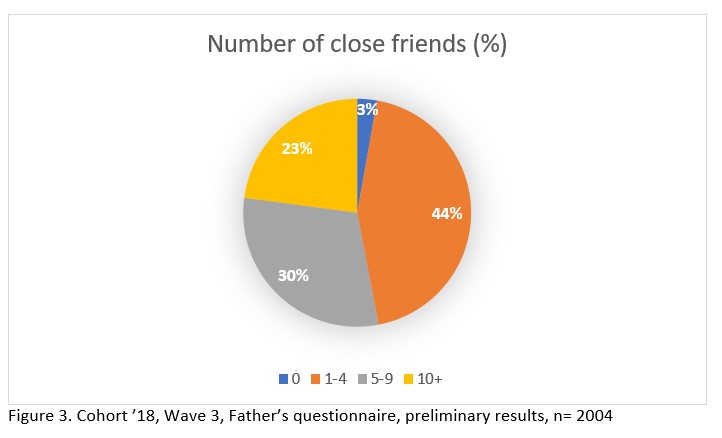 ---
Our preliminary analysis is based on a raw, 2025-person database, studying the fathers of cohort children, conducted via telephone at the 18-months old age of their child. The purpose of presenting the preliminary results is to give visibility to the opinions of fathers with small children in addition to exploring and publishing maternal responses. At the same time, the paternal study cannot be considered representative (unlike the surveys with mothers), thus, the above does not necessarily reflects the general opinion and attitudes of Hungarian fathers.